Musings on the Color Wheel 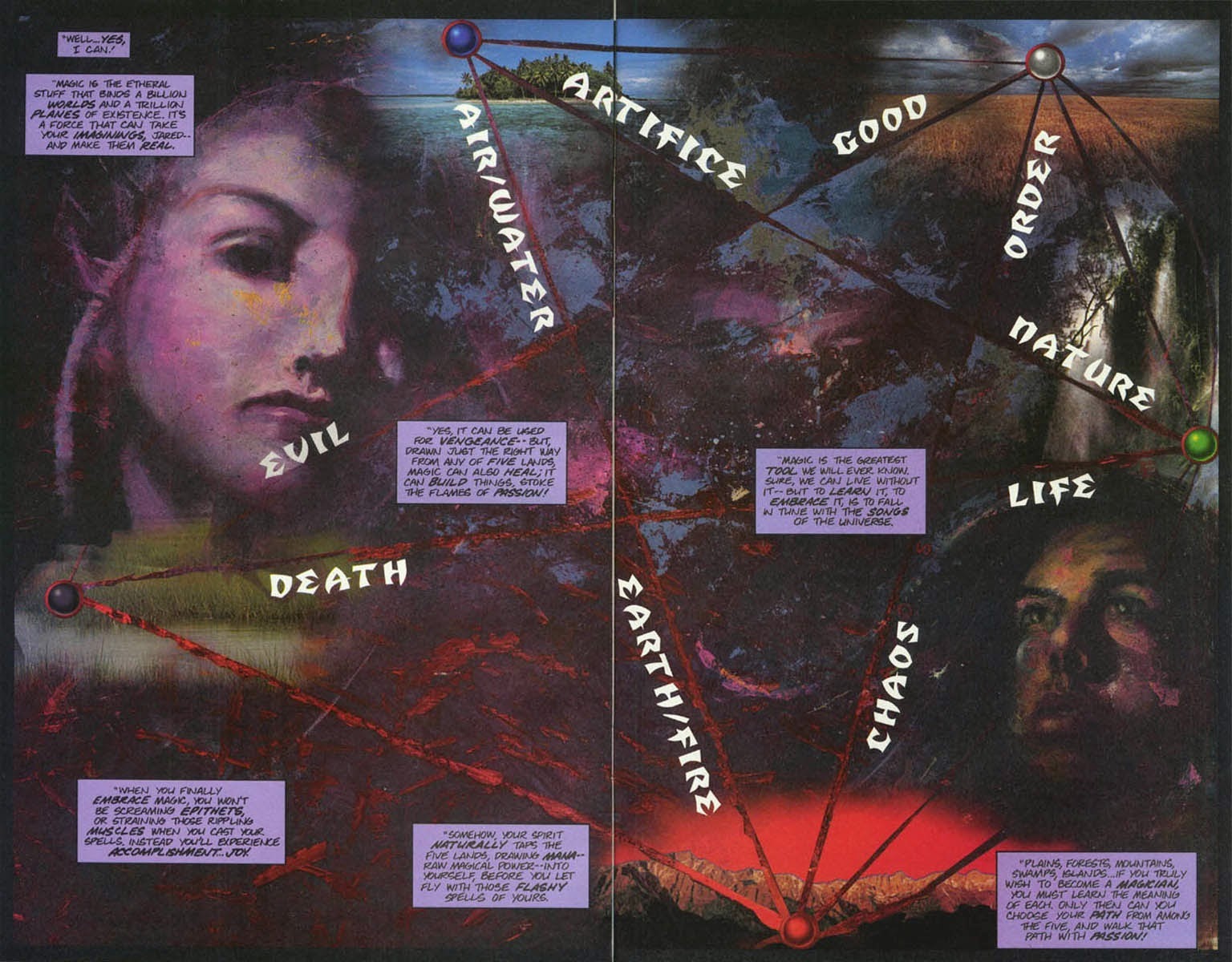 This is a picture of the color wheel (Or color star, or color pie) from Magic the Gathering. But eagle-eye Magic aficionados will notice something strange. Doesn't Wizards of the Coast keep hammering on the fact that white is not good, and black is not evil? And why is the red/blue distinction based on elements rather than on the clash between emotion and intellect?

The answer to the riddle is that this picture is from Wayfarer #1, a Magic: the Gathering comic book published by Acclaim in 1995. In that distant era the color wheel was a bit different than it was now. And I thought I'd take a look on the development it went through over the years.


When  Richard Garfield created Magic, he divvied all the cards up in 5 different colors. To cast spells of a certain color you first need the necessary amount of corresponding land cards, which provide magical energy, a.k.a. mana. Starting from that idea, mister Garfield filled in the flavor of the colors pretty much on feeling. That resulted in the following 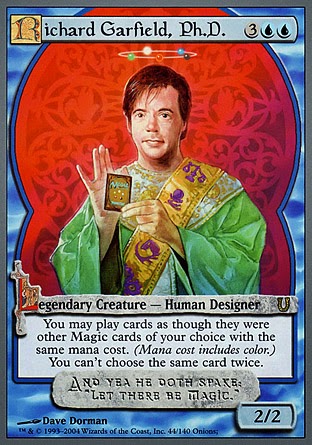 White draws its mana from plains. It’s the color of goodness, light, order and civilization. It’s creatures are soldiers, clerics and angels. Of the five colors white has the least link between its land and its creatures and philosophy, but  that is made up for by the fact that “white magic” already conjures up a clear image in peoples heads.

Blue draws mana from islands. Its elements are water and air and is the color of intellect. It’s creatures are all manner of sea and air creatures and wizards.  The link between its elemental and philosophical components may not be apparent at first but, as MaRo has recently pointed out, water and air are traditionally linked to ideas of intelligence.

If white and blue needed some explanation, black does everything you’d expect from “black magic”. It draws mana from swamps, is the color of death, decay, evil and corruption. It’s creatures are zombies, vampires, demons and necromancers.

Red is another obvious color. Drawing mana from mountains, it’s elements are fire and earth and it is the color of passion. It’s creatures are either related to its elements (firebreathing dragons) or simply live in the mountains (dwarves, goblins)

Finally there is green. Drawing mana from forests, it is the color of nature and of life. As is to be expected, its creatures are wild animals, plant-based creatures like dryads or treefolk, and elves. 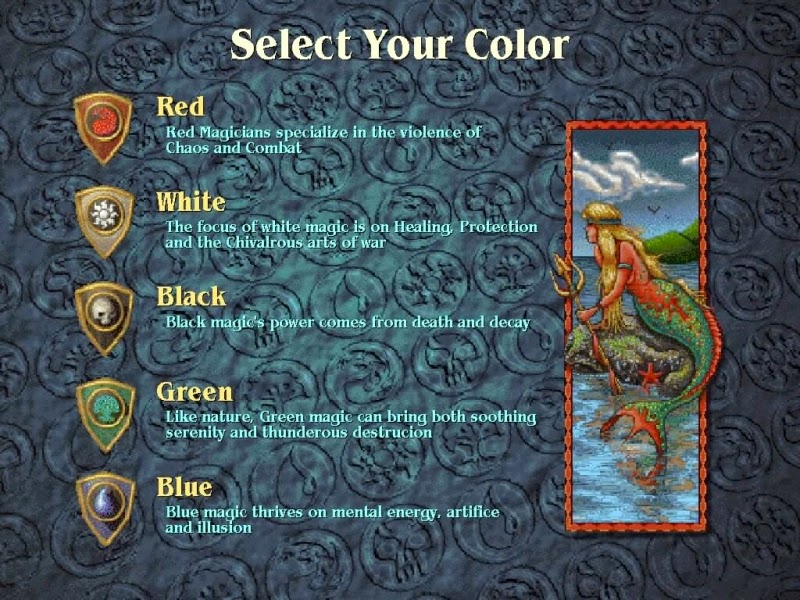 What is interesting about this early color pie is that the conflicts between colors are much more apparent than the links. Good versus Evil! Life versus Death! Order versus Chaos! Fire versus Water!  Those are very resonant conflicts, which were clearly showcased in the large number of cards in Alpha that hosed their enemy color. But while the conflicts seemed very deliberate, the links between allied colors seem more coincidental. Why, for example, are the color of nature and the color of civilization friends?

Over time the began to chance, and the color wheel grew more sophisticated along the way. Fully describing the process would be impossible, as it was done gradually, by many different people, and often subconsciously. But to illustrate this I would like to roughly chart the evolution of the “White is good, black is evil” idea. 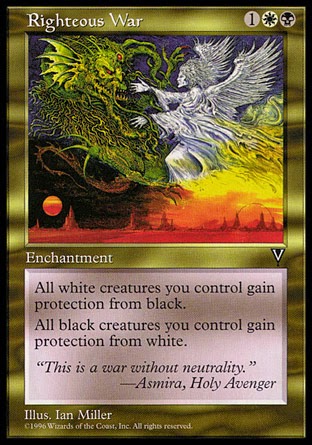 From the very beginning this was a strong part of the story of Magic. The Alpha rulebook has a very short story (Later elaboratedupon in the 4th Edition rulebook). In it two rival planeswalkers clash, and one of them is disappointed to learn that her rival would stoop so low as to use black mana. In Arena, the very first Magic novel, the mentor of main character Garth One-Eye has a similar sentiment. Interestingly Garth then reveals he also knows some black spells, to which his mentor replies that black mana in itself is not that bad, but that many lose themselves in it, being corrupted by its power. A small shift, but black mana was obviously still seen as vile.

Quicker to change was the perception of white as the color of good. Already in 1994 the expansions The Dark and Fallen Empires each took the religious aspect of white that came with the clerics and the angels, and gave it a new spin. Now white showed that it could also be the color of religious fanaticism and xenophobia. The idea that white wasn’t always good took hold quickly, the idea that black wasn’t always evil took a lot longer to arrive. Lim-Dûl the Necromancer, Baron Sengir, Kaervek the Merciless, Volrath, Yawgmoth, K’rrick, Davvol… the big baddies in the Magic plots remained uniformly black.

An interesting case is the character of Crovax. He was a crewman of the flying ship Weatherlight, and started out as a good guy. But: the main reason he joined up with the crew was because he wanted to find his lost love, the angel Selenia. The actual mission, of rescuing the kidnapped Captain Sisay was a secondary concern for him. As selfishness (or to be precise, individuality and ambition) would eventually replace “evil” in defining black, this makes Crovax possibly the first real black good guy in Magic. This may have something to do with the fact that the Weatherlight crew was a creation of Mark Rosewater and Michael G. Ryan, and MaRo would go on to be the color pie guru of Wizards, its not that surprising really. 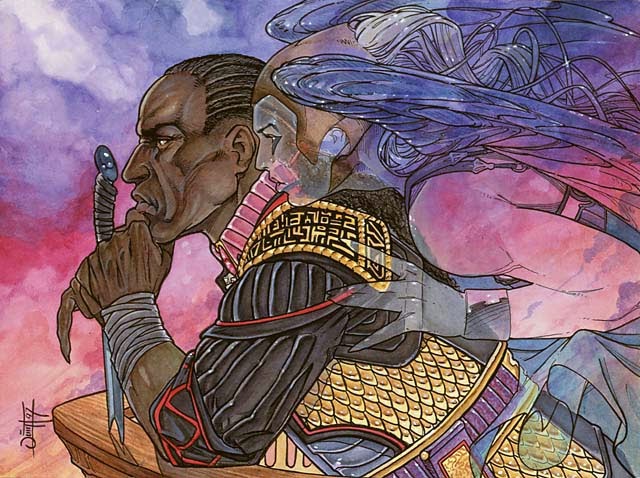 Unfortunately the Weatherlight story was taken away from Mark and Michael. MaRo is still not allowed to say why, presumable Wizards doesn’t want intra-office politics getting out, not even over 15 years down the line. But MaRo occasionally drops some information on his original plans of the Weatherlight Saga on Tumblr. One recent revelation is especially interesting. You see, in the actual printed version of the Saga Crovax becomes a vampire, is captured by the evil Phyrexians and turned into the Ascendant Evincar, one of the most sadistically evil characters in Magic canon. In the original idea of the Weatherlight Saga however, Crovax would still become a vampire, but stay with the crew! That would’ve really hammered home the idea that black could be good. Unfortunately, it didn’t go through.

After Crovax was got Xantcha as a black goodie. But her black nature stems mostly from her origin, being created by the evil (black) Phyrexians. In her outlook she is white-black, partially motivated to get revenge on her former masters, but also partially by the realisation that the multiverse needs to be protected against them.  The next character who does good deeds for a black reason is Belbe. Another defective Phyrexian, Belbe sabotages the plans of her masters not for any greater good, but for her own selfish reasons: to get a chance to live her life with her love Ertai.

By the time Invasion block rolled around, the idea that white and black weren’t necessarily good and evil seemed to be pretty much accepted with those who made the cards. Invasion block saw the final conflict against the Phyrexians, and was all about the various nations of the plane of Dominaria banding together against the Phyrexian Invasion. That included the black magic users of the plane. Some cards, like Urborg Witch, did highlight how unusual this was, but the main point of the story was that the Phyrexians were so horrible, old enemies would fight side by side. Unfortunately, this had not quite reached J. Robert King, who wrote the novels for Invasion block. In those the two main black characters, Tevesh Szat and Lord Dralnu, but betray the coalition. Suddenly the point of the story becomes “Even in the face of annihilation, there are some depths you just don’t sink to.” Which rather clashes with the “Play all five colors!”-theme that Invasion block was going for. 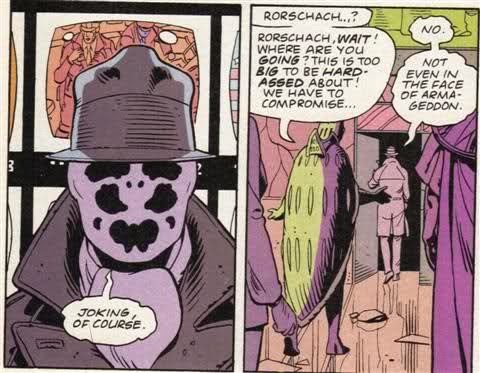 This was to be the last hurrah of the old way of looking at things. In the following years saw a major shake up of the mechanical color wheel (Disenchant moving to green, Dark Ritual to red, etc.), and thus Wizards thought a lot more about what each color represented. I think this really solidified the "white isn't necessarily good, black isn't necessarily evil" way of thinking. Which was made public in a number ofarticles by MaRo on the identity of colors, and finally in the Kamigawa black story, which saw black good guy Toshi Umezawa go up against white bad guy LordKonda. 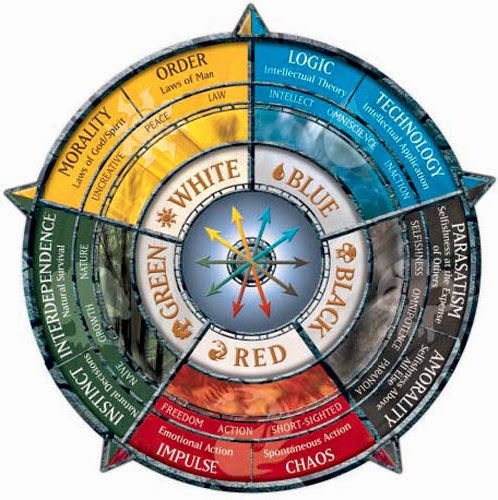 Although it no longer mentions good and evil, it still doesn't paint black in the most positive light. Parasitism and amorality? Who wants to sign up for that? If I had to summarize the current color wheel, I'd use the following words:

White seeks peace through structure.
It's main tenets are order and community.
When good, white is the defender of the weak, when evil, white is totalitarian.

Blue seeks perfection through knowledge.
It's main tenets are nurture and intellect.
When good, blue is a scientist seeking to understand the universe. When evil, blue is callous and uncaring.

Black seeks power through opportunity
It's main tenets are individuality and ambition.
When good, black is an ambitious person who stands up for themselves. When evil, black sees everyone else as mere pawns.

Red seeks expression through action.
It's main tenets are freedom and emotion.
When good, red is an artist and a freedom fighter. When evil, red is a raging madman.

Green seeks harmony through growth.
It's main tenets are balance and nature.
When good, green wants to conserve what is good and wants people to reach their full potential. When evil, green is conservative to the point of fearing all change.

Which would make the conflicts community versus individuality (white-black), intellect versus emotion (blue-red), ambition versus balance (black-green), freedom versus order (red-white) and nature versus nurture (green-blue). Meanwhile, white and blue are allied since order and intellect compliment each other. Similarly, blue and black see common ground between nurture and ambition, black and red between ambition and freedom, red and green between emotion and nature, and green and white between balance and community.

That's how I would typify today's color wheel. Surprisingly deep and complex for just a card game, but that suits Magic just fine. It's a lot deeper and complexer than you might expect if you've had it explained to you as "You remember Pokemon cards? Like that, but different." 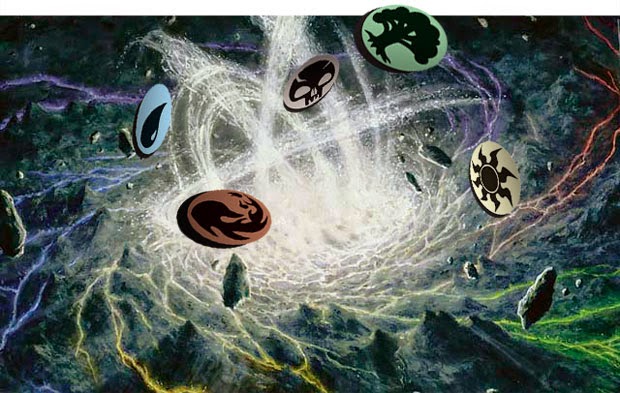 Welcome to Be Nerd!

Hello everyone! Welcome to this little corner of the internet I have reserved to put some writings about all the delightfully nerdy things that occupy my mind.
The name of this blog? It's an anagram of my real name, Berend. And since I did end up as a huge fan of comics, Magic: the gathering, other board-, card- and roleplay games, history and other nerdy hobbies, you'd almost start believing in nominative determinism...
Multiverse in Review, my other blog
My Tumblr
My Twitter