Saga is pretty hard to define. High-fantasy Sci-fi? A sprawling epic about becoming parents for the first time? A hilarious comic that tries it's best to break your heart? It's diverse, is what I'm trying to say. The bizarre universe filled with magical spaceships, robot-princes and animal people, played completely straight, reminds me most of Doctor Who. But the tone of the setting, whith its grey versus grey morality, and conflicts in which you could root for either side is more Game of Thrones. And despite the ghosts and the monsters and the magic and the spaceships the plot revolves around personal stories, full of genuine emotions, where it finds a balance between humor and drama that brings to mind the dialogue of Buffy: the Vampire Slayer.

By the way, if I ever do a list of my favorite tv-series, Doctor Who, Game of Thrones and Buffy will all be on it. So... this is going to be quite the positive review. You have been warned. If you still dare to go on, click for more!


The first scene of the comic is the birth of a cute-as-a-button baby, the daughter of Alana and Marko. Unfortunately they are deserting soldiers from opposing sides, and both armies send soldiers and bounty hunters after them, since their "miscegenation" would be a pr-disaster for both of them. But despite the war and all the action that comes from that, it really is a personal story at heart. In the very first issue the narrators says as much.

Oh, right. The story is narrated by the baby. It's great. And as an aside, isn't that just the most lovely lettering you've ever seen?

It's a good thing that the story is so personal, 'cause the characters are the greatest thing about Saga. Every single one of them has it's own distinct voice, which is captured perfectly the moment they are introduced. From the parents who are just so completely in love with each other, to the depressed bounty hunter who sees his life falling apart around him, to the ruthless robot-prince who just wants to get back to his pregnant wife. (Yes, robots get pregnant in this universe. They also need to go to the toilet, which I somehow find even freakier.) And every emotion feels genuine. From the delightful, if somewhat undignified, banter during the birthing scene, to the highly emotional scenes of... no, I won't spoil it. You need to see this for yourself. Really, the comic is one long chain of emotional scenes, and I really need to contain myself not to spoil it all for you. 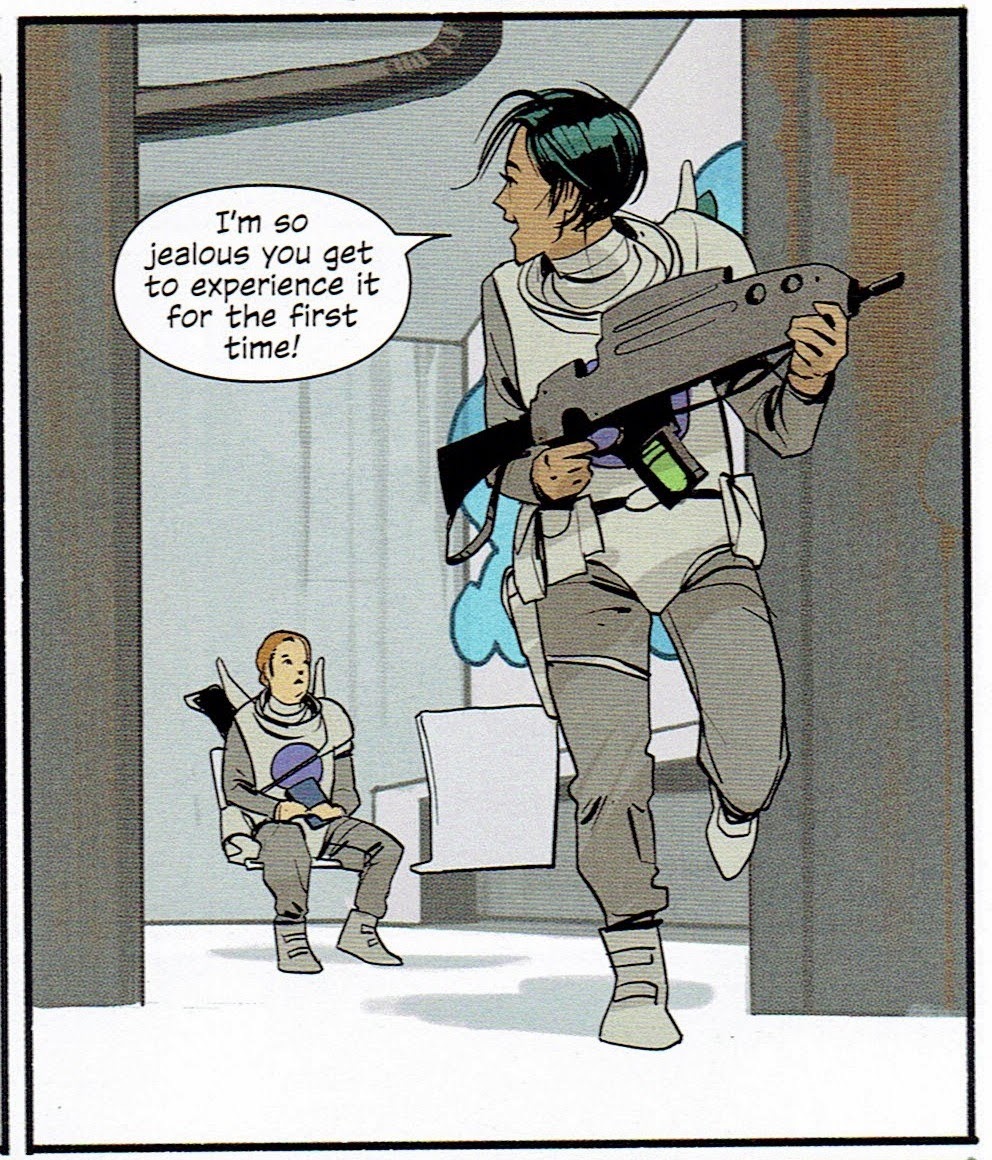 Unfortunately I fear a lot of people will be turned of by the look of the book. Not that it's not draw well, not at all! Fiona Staples does an excellent job, presenting us with bizarre designs, amazing facial expressions and great pacing. The backgrounds are sometimes a bit bland, but that's the worst criticism I can level with it. But it's the bizarreness of the designs that might get some people to ignore Saga, regardless of how gorgeous it looks. Some people are just not willing to get into Sci-fi or Fantasy, and Saga drinks deep from both wells. The main characters look like a Satyr and Faerie, there are magic spells and ghosts, but at the same time you got space travel, robots and laser guns. Personally I think it's glorious, and gives us a setting that you could find nowhere else, but I know it'll be a hard pill to swallow for some. Which is a shame. So I'm just going to push this story on people, and try to convince them to look past the setting, just for one volume. Hopefully it might make a few of them convert to the gospel of speculative fiction. 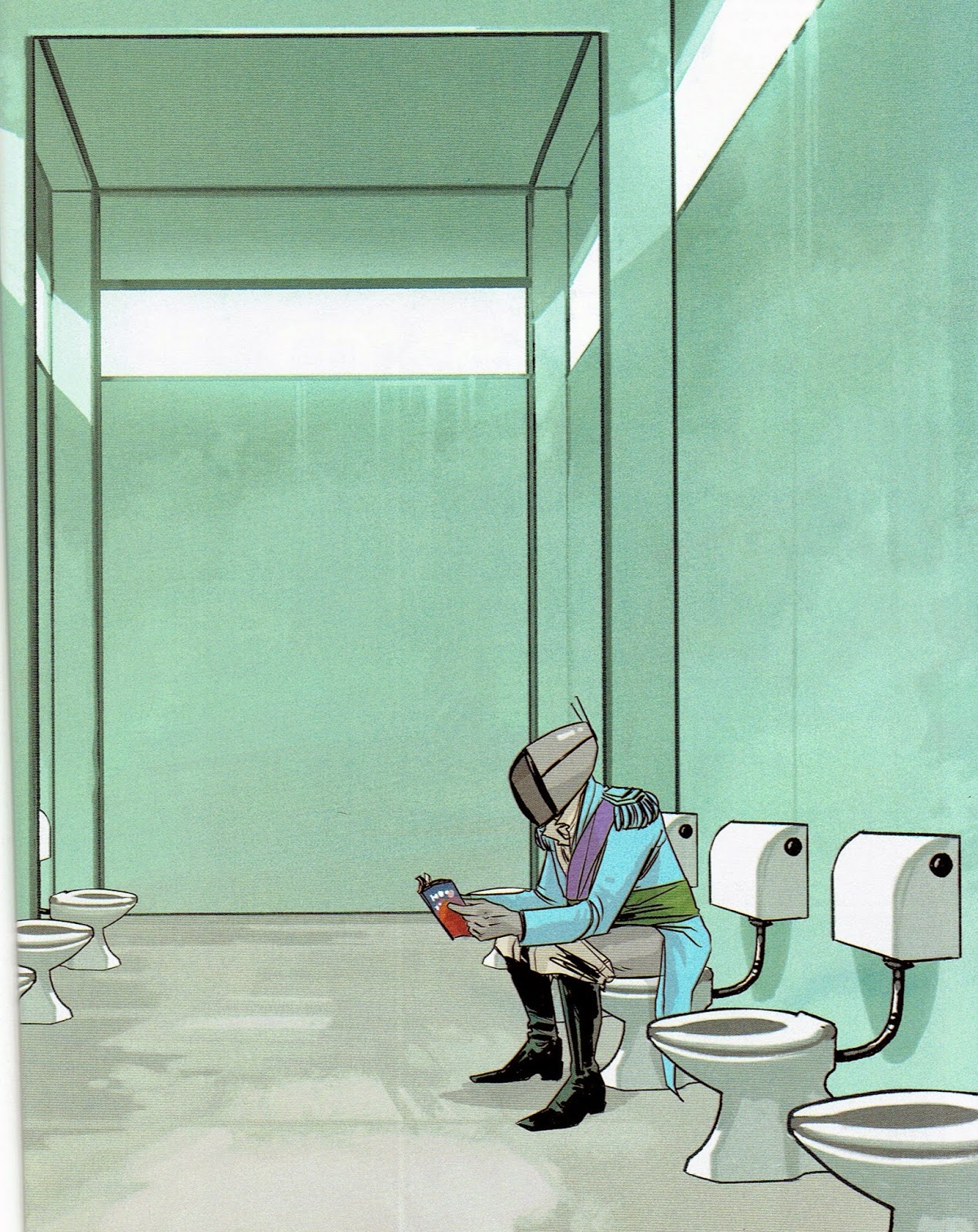 Told you Robots go to the bathroom in this comic. I could also have shown you a picture of that guy having sex! Which reminds me, there is quite a bit of sex and nudity in this comic. And swearing. And violence. So, don't buy it for your kids. Not everything with talking animals is for the under five.

It must be terrible to read a review as gushing about its subject as this one. Perhaps I should review some utter piece of dross next, to balance things out. (What is Chuck Austen doing these days?) Well, if you're getting sick of my praises, don't worry, I only got two more things to say.

Thing the first: Saga is something of a new direction for writer Brian K. Vaughn. While he's always been good, here he drops some of his Vaughnisms, and elevates himself in doing so. There is no shocking first issue reveal like in Ex Machina, Runaways or that Wolverine mini he did. And since it is a fantasy world, he can't irritate us by have his characters spew real world factiods all the time like in Y: the Last Man or Ex Machina. And with these writing ticks shaved off, Vaughn really gets the shine, especially in the character work. It took me a while to really connect with the characters in Y, and the characters in Ex always remained a bit to quippy and factiod-spewing for my tastes, like living Tv-Tropes pages. But three pages into Saga and I was already absolutely in love with Marko and Alana. Though not as much as they are in love with each other, obviously.

And the final thing I wanted to say: I fully expect this comic is going to make me cry at some point. After all, in the very first issue the narrator says that she gets to grow up old. Which suggests to me that Saga is going to play out over many years. Because of that, plus the fact that the bloody thing is written by Brian K. Vaughn (The K stands for "Kill your darlings") I fear that at one point one or both of the main characters is going to die. And if that happens, I will well up, I will curse mister Vaughn for being such a terrible person and such a great writer, and it might just launch Saga into my list of all-time favourite comics.

PS: If you're missing mention of a certain feline character in this review, check back in a week or so for a special article on cats in comics!
Gepost door Squirle op 09:13

Welcome to Be Nerd!

Hello everyone! Welcome to this little corner of the internet I have reserved to put some writings about all the delightfully nerdy things that occupy my mind.
The name of this blog? It's an anagram of my real name, Berend. And since I did end up as a huge fan of comics, Magic: the gathering, other board-, card- and roleplay games, history and other nerdy hobbies, you'd almost start believing in nominative determinism...
Multiverse in Review, my other blog
My Tumblr
My Twitter